XBinder is a source code generator; it takes an XML schema document as its input and produces computer source code in one of four languages (C, C++, Java, or C#) from it. XBinder is also referred to as a compiler, but unlike most compilers, which take source code and translate it to object or executable code, XBinder takes a schema document and translates it to source code. The generated source code contains data structures and objects that can hold the data contained in an XML instance that's based on the schema. The code also contains functions and methods that can be used to perform various operations on the data.

Once the code generation is done, the source code that is generated can be used at run-time to decode and encode XML instances. Decoding is the process of taking the data in an XML instance and populating the corresponding data structures and objects with those values. Encoding is the opposite; it is the process of taking data values that are in the generated data structures and objects and creating an XML instance from them. The code generated by XBinder includes functions and methods to do this encoding and decoding.

The diagram below, which is taken from the XBinder product information page on the Objective Systems web site, illustrates these points: 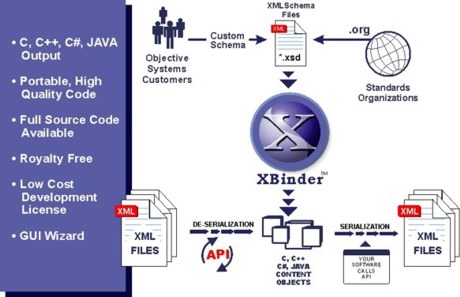 In a later section of the tutorial we'll work through taking a schema document and producing code from it.